The origin of the Terriccio Estate goes back to the very far past. It extends over a territory where the Etruscans extracted iron and copper of which there are still traces to be seen today. During the period of the Maritime Republics, of the fratricidal feuds and the pirate attacks, the old castle, stronghold realized in the estate, became for the Republic of Pisa an important strategical outpost to control a stretch of the Tyrrhenian coast. In the 14th century the Bishop of Pisa conceeded landrights of the Castle, its rural buildings and the land to the Count Gaetani of Pisa. They made veritable estate out of it, the so-called “County of Terriccio” which remained in the hands of the Gaetani family for over five centuries. Subsequently the Terriccio was gradually trasformed into an efficient agricultural establishment with warehouses and production sites which are partly still used today.Today, the 25 hectares under vine in the early 1980s have expanded to about 60 currently in production.
A density of about 5,500 vines per hectare was adopted in the vineyards that supply the Sangiovese, Cabernet Sauvignon and Merlot grapes for the second red wine, Tassinaia, and roughly 7,000 for the Cabernet Sauvignon and the small proportion (roughly 10%) of Merlot that go into the blend for Lupicaia. 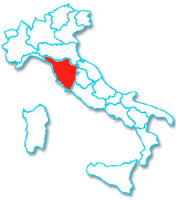